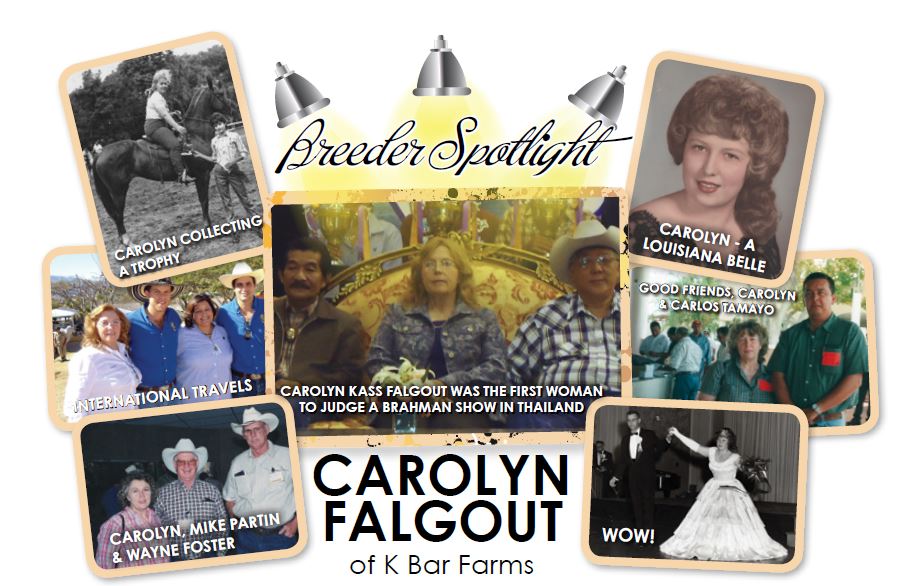 Carolyn Kass Falgout, owner of K Bar Farms, has accomplished so much in her life. She is a top Brahman breeder and judge, an international traveler, a savvy businesswoman, a mother and a grandmother.

Carolyn comes from a family of hard workers. Her father owned a fishing boat that eventually got him started in the oyster business, which is still a large part of Carolyn’ life. Her family also owned a dairy, so she has been around cattle since her earliest memories.

“I remember when I was just three or four years old my job was to feed the baby calves, so I have really been working with cattle all my life,” Carolyn said.

Born in Louisiana, Carolyn grew up on a dairy. Growing up on a dairy was hard work that required constant attention. Someone always had to be at the dairy and the cows were milked twice a day. The dairy cattle were sold when Carolyn was 14 years old, which freed up time for her to pursue other activities.

Carolyn joined the band in high school and learned how to play the accordion. She also found that she had a real talent riding horses. She and her brother William competed every weekend at horse shows and rodeos. She was very competitive, winning numerous trophies and awards.

While Carolyn’s weekends were busy with horses and winning trophies, her weekdays were filled with school and working at the family’s oyster factory. Every day after class, Carolyn and her brother would ride the bus to the oyster factory.

Marrying at the age of 19 as well as becoming part owner of her family’s oyster business kept her very busy, so the horses were sold as she just did not have the time for them or the competition she so enjoyed. She and her first husband had two children, Andrea (Andy) and Stephen. They lived on family property between the oyster farm and the factory.

Carolyn likes to say, “My Daddy always said I was business-minded because I was born on a desk in the family dairy. My brother, on the other hand, was born on the kitchen table. My parents always said that’s why he liked to eat so much.”

Business-minded from birth, Carolyn added another venture to her busy list of being a mother and an oyster farmer and bought a rental property from her grandfather. That purchase started a lifelong venture of owning real estate and rental properties.

“My Grandfather had real estate and thought it was a good investment,” Carolyn said. “He gave me my beginning with real estate, and I still have rental properties and real estate investments to this day.”

Carolyn worked hard raising a young family and running a business while her husband worked on the Alaska pipeline, but after 12 ½ years of marriage, they divorced. With two young children to raise, Carolyn’s entrepreneurial spirit continued and she opened a variety of successful businesses over the years.

Carolyn eventually met and married her husband Linny. They have been married for over 30 years and Linny has stood by Carolyn’s side from the moment they met.

“Linny is a wonderful husband and has been a great father to Andy and Stephen,” Carolyn said. “He has always been supportive of everything I do.”

He was there as she opened a department store, then a bar and restaurant, and then a sandwich shop. She even had a catering business for a period of time. Her ventures in the food business should come as no surprise to anyone who has eaten Carolyn’s cooking. She has won numerous awards for her delicious Cajun cooking, including the Bridge City, “Gumbo Capital of the World”, gumbo cooking contest 5 years in a row.

“There was a man that tried to beat me at the Gumbo cook off year after year, and I always beat him,” Carolyn said. “Finally, after I had won it for five years I decided to quit competing. He called me and said that he had perfected his recipe and he thought he was finally going to beat me. I told him I knew he was going to beat me because I had decided not to compete anymore.”

But when Andy told her mother she wanted her to compete just one more year in the memory of Carolyn’s mother who had recently passed away, Carolyn could not tell her daughter no. And it is no surprise that they won the Gumbo cook-off one last time.

After working hard to make all of her business ventures successful, Linny encouraged Carolyn to slow down a bit. Needless to say, Carolyn simply shifted her boundless energy from one project to another and purchased of a farm north of New Orleans, in a little town called Amite, Louisiana. They initially bought seven different pieces of property that has grown to the current total acreage of around 480 acres.

Carolyn and Linny started with a few commercial cattle, but Carolyn had always had affection for Brahman cattle. So began her next venture—starting her Brahman herd. She had a family friend that had moved to Flatonia, Texas, and she felt sure he would know someone that would have some Brahman heifers she could buy.

A quick trip to Texas was the start of K Bar Farms in the Brahman business. Wayne Foster of Flatonia had a few Brahman heifers for sale, and Carolyn liked their looks. He also told Carolyn about a few heifers his friend, Jack Keel, had for sale and she bought them as well. Since Carolyn did not have room in the trailer for all the heifers she had bought, Wayne agreed he would bring them to her on one condition – Carolyn had to cook him a pot of Gumbo. Needless to say, the trip was a success for both parties. Wayne Foster delivered the heifers to her and the same week Carolyn’s phone started ringing. Everyone in town wanted to know where she had gotten her Brahman cattle!

Carolyn then met longtime Brahman breeder Clyde Goudeau. She bought a bull from him and asked him to show the bull for her. Carolyn went to her first show to watch her new bull and studied everyone that was showing, especially Clyde.

“Ï watched everyone show,” Carolyn said. “While I had been around cattle all my life I had never shown cattle. I wanted to start showing and thought the best way to learn would be to watch everyone show, and really study what they were doing and what made the cattle look better.”

Carolyn attended one more show before she tried her own hand in the show ring. Carolyn’s first show was the Dixie National. She won Grand Champion Female.

“I like my cattle and feel good about our breeding program,” Carolyn said. “But it is nice to have the confirmation by winning these types of awards. 40/0 has also been a top bull in Thailand and in Mexico, so that is really gratifying to a breeder that other breeders think enough of your cattle to use them in their programs.”

Carolyn has not only made an impact on the Brahman breed domestically, but has traveled the world promoting Brahman cattle. She has made good friends all over the world and considers her international friends an extension of her family.

“Some of my best friends live in other countries,” Carolyn said. “We might not get to see each other as often as we would like, but we are really close friends through our love for Brahman cattle.”

Carolyn has made history within the ABBA on more than one occasion, as she was the first woman to judge a cattle show in Thailand. Since then, she has judged the International Brahman Show in Thailand and really enjoys the country as well as the people.

As an ABBA Member, Carolyn has sat on the Board of Directors for 12 years, has been Chairperson of the Communication Committee, has sat on the Show Committee and currently sits on the International Committee.

Carolyn is proud of the Brahman program she has built from the ground up. She picked the cows, chose the sires and has bred some great animals.

As she travels around the US or to other countries everyone recognizes her for her great Brahman cattle, straight talk and great cooking. Anyone acquainted with Carolyn will have to agree, she knows her oysters, her Gumbo and her Brahman cattle.